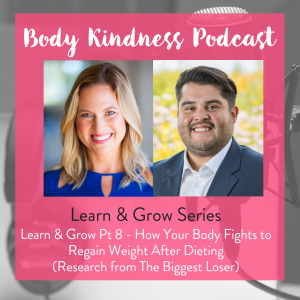 Our original interview was released in 2016 and replaced with this update.

Don’t miss this important episode in the Learn & Grow Series. We talk about one of the longest studies on weight cycling and dieting — a study that followed the Biggest Loser contestants from Season 8 for six years. I help Bernie understand the outcomes of the journal article and how he can make peace with his experiences and move forward with body kindness instead of dieting.

The study found that their bodies had “fought to regain weight”. Six years after the show: