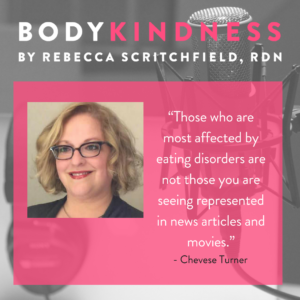 When the Netflix Original “To the Bone” was released many helping professionals who work with people with eating disorders were not too happy.

The primary complaint was concern that (once again) stereotypes for eating disorders would be reinforced by centering the story around a very thin white woman. See here:

How Current Eating Disorder Discourse Fails The LGBTQ Community. And How We Can Change That

To the Bone: creating eating disorder awareness or doing harm

As An Eating Disorder Therapist, I’m Worried After Seeing Netflix’s ‘To The Bone’

Why We Need More ‘Hunger’ And Less ‘To The Bone’

I sat down with Chevese Turner, founder of the Binge Eating Disorder Association (BEDA) to discuss the myths and misconceptions about who gets eating disorders (we all do) and how we can all do better to identify and help those struggling to find recovery. It’s pretty tricky because many people with weight concerns show up to diet programs and weight loss centers when they could have an eating disorder.

In this episode we also discuss the appropriateness of using the word “fat” as as descriptor, why we need to acknowledge our privileges, and the story for how Binge Eating Disorder became acknowledged as it’s own eating disorder. (hint: weight stigma and diet culture are major reasons why BED is under diagnosed and treated today).

Tune in and let me know what you think by leaving a rating or review.

Chevese Turner founded the Binge Eating Disorder Association (BEDA) in June 2008 recognizing the need for an organization to advocate on behalf of individuals affected by binge eating disorder (BED) and the providers who treat them. Turner’s well-rounded career in the health care, pharmaceutical, political and non-profit arenas, as well as her many leadership roles within these fields, prepared her to launch BEDA, the only organization specifically suited to support individuals and treatment professionals managing BED.