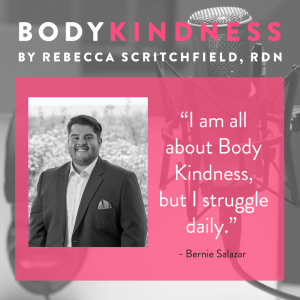 Bernie has been stepping on the scale again and asking his doctor about his weight. He’s looking for some advice from me. We spend a big chunk of this episode getting to the core of his concerns. He wants to have more energy for his daughter and he doesn’t put the time into his self-care he wants to or he thinks he “should”. We disentangle the “inner critic voice” from the “caregiver voice” so Bernie can stay focused on his well-being and not his body shape.

Tune in to hear how I help him reframe his experiences into actionable, compassionate choices in line with his values.

Then toward the end, you’ll hear us both “go off” on a couple people who have been shaming folks on social media. I called it bullying and abuse. Should I have gotten that mad? Yep. And you just might get mad at it too.