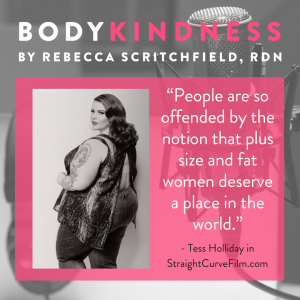 Ninety percent of women and young girls say they do not feel represented in the fashion industry or in media, and that the imagery they consume on a daily basis makes them feel “disgusting” and “less than”.

An exciting new documentary Straight/Curve examines the industries and obstacles responsible for this body image crisis and showcases the dynamic leaders fighting for more diversity of size, race and age. Jenny McQuaile, Director/ Producer of the film, is my guest on the podcast today.

At a time when our brain processes images 60,000 times faster than words Straight/Curve sets out to change the imagery we are seeing and to bolster a movement that is redefining society’s unrealistic and dangerous standards of beauty to impact society at large.

Straight/Curve:Redefining Body Image will be available to rent or buy on iTunes, Amazon and Vimeo on Demand from May 18th. You can go to straightcurvefilm.com to find a link to get the film and to download the FREE House Party Screening Kit so you can have the sometimes tricky conversations about body image in the safety of your own home with your kids/sisters/friends/coworkers. The Kit comes with discussion questions and fun activities for all ages.

The Straight/Curve House Party Project, in partnership with CoverGirl and the Geena Davis Institute, will launch on May 22nd with an event in NYC. There will be a panel of exciting body image experts and advocates broadcast LIVE on Facebook Live so everyone around the country can tune in and ask questions. Check out the website for more information on this event.
Imagine if a quarter of a million women, mothers and daughters gathered in homes around the world for a real talk about body positivity and invited the men and boys in their lives to be a part of this conversation. What kind of change would be possible if women and girls everywhere… loved themselves? That’s our goal for Straight/Curve – 250,000 conversations – 250,000 women and girls ready to spread the message about body positivity. 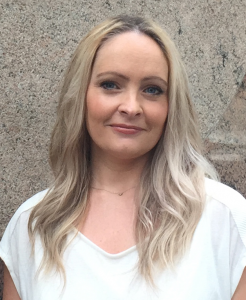 Jenny McQuaile is an award-winning NYC-based journalist and documentary filmmaker. She began her career in journalism in Ireland and London and moved to New York to pursue a career in film. She has worked in production on major TV series and feature films such as Steven Soderberg’s “The Knick”, “Annie”, “Blue Bloods” “About Ray” and “The Bleeder”.

Jenny recently wrapped production as Associate Producer of “The World Cup Project”, a TV documentary series following 11 countries around the world that use soccer for social change. She directed and edited tree episodes of the series and co-directed the feature length documentary, based in Liberia entitled “Power of Play”. In between larger projects, she has directed and edited short videos for the nonprofit America SCORES, as well as a Gala video for the nonprofit LSA in Harlem. She is now in pre-production for her documentary, Inside Skinny, based on Ireland’s number one plus size model trying to make it in New York.

Sign up here to get started and stay up to date on the latest offerings.