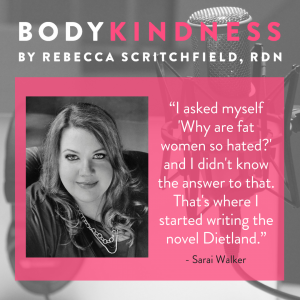 Dietland is a wickedly funny and extraordinarily timed satire which premieres tonight, Monday 4 June at 9PM on AMC. It’s based on Sarai Walker’s 2015 best-selling, critically acclaimed novel of the same name. While we eagerly await Episode 1, I’m delighted to say that Sarai is my guest on the podcast today!

The heroine of the story Plum Kettle, a ghostwriter for the editor of one of New York’s hottest fashion magazines. Struggling with self-image and fed up with how she’s treated by her boss and society, Plum sets out on a wildly complicated road to self-awakening. At the same time, everyone is buzzing over news reports about men, accused of sexual abuse and assault, who are disappearing and meeting untimely, violent deaths.

Plum also finds herself in the middle of two factions — one sisterhood who may be responsible for the attacks on male harassers, and the other which preaches female empowerment. She straddles these two groups, trying to make sense of the changing world and her part in it. 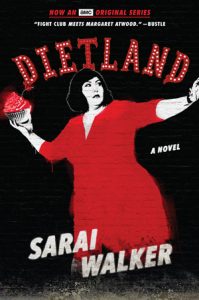 Sarai Walker is author of the novel DIETLAND, which is now a TV series on AMC in the USA and Canada, and on Amazon Prime in countries around the world. Her essays have appeared in the New York Times, the Guardian and the Washington Post. Sarai worked as a writer and editor on the 2005 update of Our Bodies, Ourselves, and previously wrote for magazines including Seventeen and Mademoiselle. She earned her M.F.A. in creative writing from Bennington College, and Ph.D. in English from the University of London. Walker is currently living in Los Angeles, where she is developing a new TV series, as well as writing a second novel, which is even more bonkers than her first one.