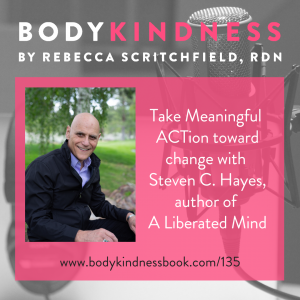 What if instead of trying to change negative thoughts, judgments, and feelings that come up when practicing Body Kindness, you learned to change how you relate to those thoughts and feelings instead? That’s exactly what we’re discussing in this week’s podcast with Steven C. Hayes, the creator of Acceptance and Commitment Therapy (ACT) and author of A Liberated Mind.

You’ll learn all about ACT and how it influenced the Body Kindness philosophy, as well as specific tools and skills you can use to pivot toward a better life and a better well-being by changing how you relate to your mind rather than getting deflated by your self-criticisms and judgments. I tried these skills in real-time during our chat, and I hope you’ll join me in trying them yourself. 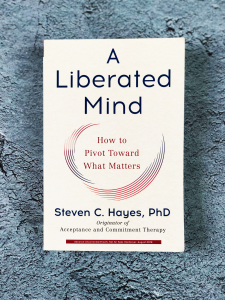 Steven C. Hayes is Nevada Foundation Professor at the Department of Psychology at the University of Nevada. An author of 45 books and over 625 scientific articles. He is the developer of Relational Frame Theory, and has guided its extension to Acceptance and Commitment Therapy (ACT) a popular evidence-based form of psychotherapy that is now practiced by tens of thousands of clinicians all around the world.

Dr. Hayes has been President of several scientific and professional societies including the Association for Behavioral and Cognitive Therapies (ABCT), and the Association for Contextual Behavioral Science. He was listed by the Institute of Scientific Information as the 30th “highest impact” psychologist in the world, and Google Scholar citations place him among the most cited scientists in the world. He has received the lifetime achievement award from ABCT and is a Fellow of the American Association for the Advancement of Science, among numerous other awards.