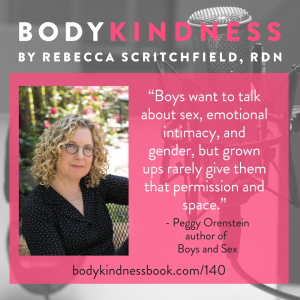 Author Peggy Orenstein is back on the show with her instant New York Times Bestseller, Boys and Sex. Tune in to hear insights from her conversations with over 100 boys from high school to college across the U.S. We discuss why parents aren’t talking to their boys about sex and intimacy even though they really want the space to explore, to be vulnerable, and to figure it out, not just absorb the cultural narrative about masculinity that was created for them. We chat about how this conversation gap, especially between boys and dads, can harm today’s boys and girls in the context of consent, hookup culture, and forming intimate relationships with partners.

Peggy Orenstein is the New York Times bestselling author of Girls & Sex, Cinderella Ate My Daughter, Waiting for Daisy, Flux, and Schoolgirls. A contributing writer for the New York Times Magazine and AFAR magazine, she has been published in The Washington Post, Slate, New York Times, The Atlantic, and The New Yorker, among other publications, and has contributed commentary to NPR’s All Things Considered. She lives in Northern California with her husband and daughter.