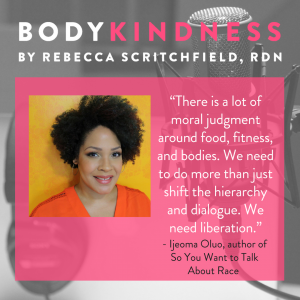 Ijeoma Oluo’s So You Want to Talk About Race is a great starting point for listening, learning and taking meaningful action.

I also recommend White Fragility by Beverly DiAngelo to any white person who wants to do better at creating change.

Books to talk to kids about race.

For race and health, I recommend Fearing The Black Body: The Racial Origins of Fatphobia. Dr. Sabrina Strings was on the Body Kindness podcast: Part 1, Part 2.

This episode was first aired in January 2018.

Ijeoma Oluo wants us to talk about race. In her new book, So You Want to Talk About Race (Seal Press) she breaks down the barriers and explains, in simple terms and with lively examples, key concepts of privilege, intersectionality, microagressions, cultural appropriation, and more.

In our podcast chat, Ijeoma helps us embrace the connections between body positivity, the anti-diet movement, and race and class issues that aren’t often discussed in these important spaces. Regarding intersectionality, she says “It’s the nature of privilege to prioritize the people at the top, whose needs are almost met. Intersectionality says that you pause and say ‘my needs are not the only needs’. Including the needs of less privileged people helps more people, not just a select few at the top.” 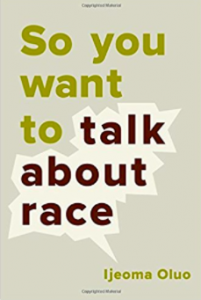 She says “we live in a country that upholds the ideal that we aren’t allowed to talk about race and not talking is THE problem.” Ijeoma wants us to do what we can to look at everyday opportunities to create change in our culture.

An editor-at-large at The Establishment, Ijeoma’s work has been featured in NY Magazine, The Guardian, The Washington Post, and more. She has talked about race on BBC, NPR and CBS Evening News, as well as in countless offices, universities, conferences, and internet forums.