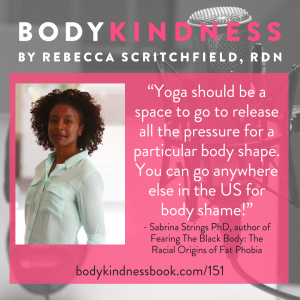 Join me in conversation with Dr. Sabrina Strings, author of Fearing the Black Body: The Racial Origins of Fat Phobia. She also is a certified yoga teacher and advocate for inclusivity in yoga. We discuss our experiences with yoga and hope for systemic change.

Abstract: Yoga has seen an explosion of popularity in the United States. Though the practice can be traced to the Indus Valley civilization, its mass media representation is dominated by young, thin, white women.

Little is known about how the practice came to be portrayed in this manner. However, scholars suggest that when media outlets target (white) women, they often encourage them to adopt “technologies of femininity” that may include instructions on how to tame, diminish, or banish fat.

In this article, we examined if and how yoga has been presented in this fashion in the mainstream media. We performed a mixed-method analysis of cover images and articles featured in Yoga Journal from 1975 to 2015.

Findings revealed that since 1998, men and people of color have seen a steep decline in representation on the covers. Full-body shots of white women have increased precipitously. We also found that the articles promote yoga as a part of a beauty regime. This regime relies on a dubious mix of self-love and fat aversion for white women, while people of color are almost entirely excluded from consideration.

We conclude that, since 1998, coinciding with the latest yoga boom, Yoga Journal has encouraged white women to adopt yoga as a technology of femininity that tames fat. It has concomitantly disappeared people of color. 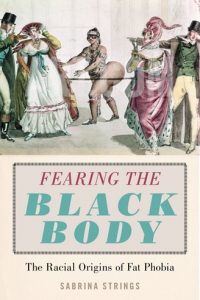 Sabrina Strings is an Associate Professor of Sociology at the University of California, Irvine. She was a recipient of the UC Berkeley Chancellor’s Postdoctoral Fellowship with a joint appointment in the School of Public Health and Department of Sociology.

She has been featured in The Feminist Wire, Yoga International, and LA Yoga. Her writings can be found in Scientific American, New York Times, Signs: Journal of Women in Culture and Society, Fat Studies: An Interdisciplinary Journal of Body Weight and Society and Feminist Media Studies. Sabrina was the recipient of the 2017 Distinguished Contribution to Scholarship Article Award for the Race, Gender and Class section of the American Sociological Association. Fearing the Black Body is her first book which is available everywhere and also on audiobook.