Rebecca is a freelance writer for Washington Post, SELF, and others. Here’s a selection of articles with links to the full stories. 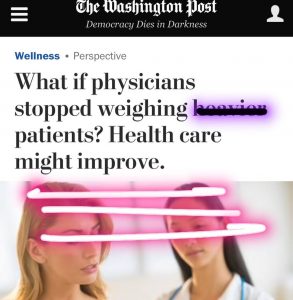 “What if doctors stopped using BMI as the trigger for conversations about behavior changes and instead collaborated with their patients on the importance of maintaining healthy habits, regardless of their weight? This approach would probably reduce body shame and weight stigma, and improve health care.”

“Health-care avoidance showed that one’s body mass index (BMI) was correlated with weight stigma, increased body shame, and rising health-care stress. Ultimately, some higher weight patients give up on their doctor visits altogether as an attempt to escape their stress and anxiety around health-care encounters.”

“Weight Watchers this week announced its plans to offer free six-week memberships to kids as young as 13, beginning this summer. The company’s move is part of a bigger plan to grow revenue and a loyal customer base for life. (Start ’em young, right?)

As a health professional and mother, I am appalled. With celebrity names such as Oprah Winfrey, who is on the board of directors, and DJ Khaled, the latest spokesperson for Weight Watchers, the company is on track to exert powerful influence on people far and wide. Kids will undoubtedly pay a heavy price for this “free” membership, in the form of body shame. It will not only affect those who participate, but also every other teen who is exposed to the message that some bodies are “problems,” and if you’re at a higher weight, your body needs to be fixed. Thus, kids of all sizes will have something to fear.

The name is Weight Watchers, not Health Enhancers. The second the focus turns to weight, the potential for mind and body damage begins…”

The Lily: Fat-shaming in fitness culture needs to stop

“When Ragen Chastain set the Guinness World Record for the heaviest woman to complete a marathon, she said she hoped her record would soon be broken “to increase visibility of what larger people can do.” As a self-identified “fit fatty,” Chastain is an advocate for the rights of people to engage in physical activity at any size. She and a growing number of others are shedding light on ways in which our society upholds barriers to movement among the overweight and obese…

… As a certified exercise physiologist, I’ve heard many stories like Chastain’s, and they’ve made me realize that we need to be doing a much better job at welcoming people of all sizes into movement without making assumptions about them….”

SELF: Why Fear of ‘Sugar Addiction’ May Be More Toxic Than Sugar Is 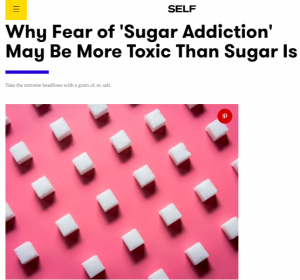 “If you search “sugar toxic” or “sugar addiction” online you’ll find enough headlines to put you into full on panic mode and say, “I’ll never eat a piece of birthday cake again!” But in the heyday of my dieting, my mantra was, “If it’s fat-free, it’s for me!”

Back then, fat was enemy number one. Sugar might as well have had a health halo, because all the “good foods” were devoid of fat and filled with sugar. Remember Snackwell’s? It was a line of cookies that was marketed as healthier because they were fat-free. But while they had none of the fat, they had lots of the added sugar. Snackwell’s popularity has dipped now that sugar, not fat, tops the “don’t you dare eat it” list—and with particular fervor too…

… As a registered dietitian nutritionist, I spend lots of time talking to people about their eating habits and how they feel about food. I’ve found that focusing on details such as exactly how many grams of added sugar you eat can be an unneeded and unhealthy practice for some. In my opinion, the fear of foods with added sugar is more toxic than the sugar itself.”.

US News: This Nutritionist’s Manifesto Against the Whole30 Will Shake Your View of Healthy Eating 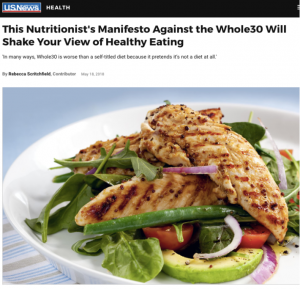 “Given Whole30’s widespread popularity and highly appealing promises, you might wonder, “Should I try it too?” In short: Hell, no!

But – but – Whole30 is a distraction from true mental and physical health. Why? Because it’s an incredibly restrictive diet that espouses the idea that your worthiness is tied up in your weight, appearance and ability to resist temptation. In many ways, the Whole30 “program” is even worse than a self-titled “diet” because it pretends it’s not a diet at all.”

US News: Are Your Weight Concerns for Your Kids Too Much? 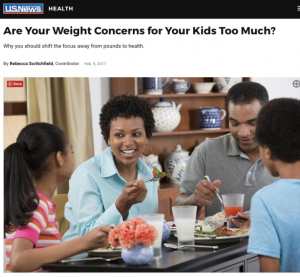 “AS PARENTS, WE WANT TO protect our kids from harm. But what if we’re the ones inadvertently causing it? It’s never too late to change. That’s why I’m asking every parent who has concerns about a child’s weight to shift the focus away from pounds and put it on the child’s health.

It’s natural to worry. Maybe your daughter or son looks like she or he is getting heavier, and alarm bells go off. Perhaps you were teased or had low self-esteem for the same reason when you were a kid. You don’t want your child to endure the same thing, and so you monitor food intake. You make little comments about appearance. You put your child on a diet. You may feel like it comes from a good place of genuine concern for their health.

But it’s also dangerous: According to research from the University of Liverpool and Florida State University published in the journal Pediatrics last year, identifying your child as overweight has detrimental consequences…”

US News: What Every Parent Should Know About Eating Disorders 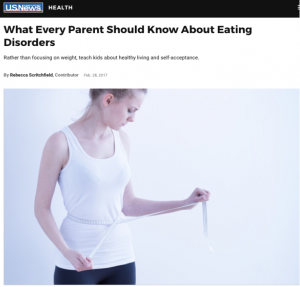 “THIS IS NATIONAL EATING Disorders Awareness Week, and the theme is “It’s Time To Talk About It.” I completely agree. We need to raise awareness about this common problem that affects so many, including children. The stakes are too high not to talk about it.

In the United States, 20 million women and 10 million men suffer from a clinically significant eating disorder at some point in their lives, according to the National Eating Disorders Association. Every 62 minutes, at least one person dies as a direct result of an eating disorder…”

US News: An Alternative to a Proposed Guideline Suggesting Weight Loss for Kids 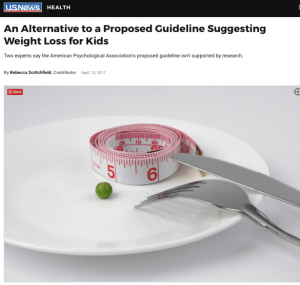 “AS PARENTS, WE PRETTY much focus every single day on helping our kids get what they need. When it comes to their health and well-being, we know that supporting consistent and restful sleep, regular meals and giving kids chances to play are all part of the deal.

Medium: Why the New Rules for Talking to Kids About Weight is a Really Big Deal 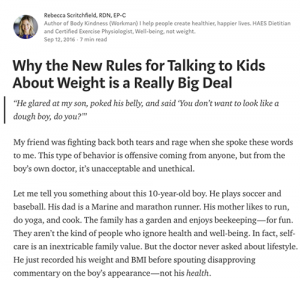 “Weight stigma and the supposed “solution” for fatness, dieting, are more likely to lead to eating disorders and depression than better health. Fifty years of research tells us that eating disorders are the most deadly mental illness.

When something isn’t helpful, it’s time to stop it.”